The New York City Police Department is asking for the public’s assistance in ascertaining the whereabouts of the unidentified individuals depicted in the attached media who are being sought for leaving the scene of a collision with injuries that occurred within the confines of the 40th Precinct in the Bronx.

It was reported to police that on Thursday, August 18, 2022, at approximately 1730 hours, a 13-year-old male was crossing Brook Avenue at the intersection E. 140th Street, when he was struck by a moped, traveling northbound on Brook Avenue against traffic.

The moped was being operated by an unknown adult male, who had an adult female and a female child as passengers.

All three occupants remounted the moped and fled the scene to parts unknown.

The 13-year-old male sustained a broken left leg as a result of the collision and was transported to NYC Health + Hospitals / Harlem in stable condition.

The operator of the moped is described as an adult male, Hispanic or Asian, with a medium skin complexion, with a heavy build and facial hair.

The adult passenger of the moped is described as an adult female, White, with a medium build, and with long brown hair.

She was last seen wearing a black t-shirt.

The moped is described as being colored in red and black. 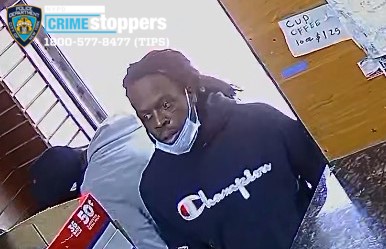